Is it over for our high street or is this the new beginning?

To say the last few years have been a tough environment for the retail sector is an understatement, with several of the big brand names disappearing from the high street, which has become littered with empty shops or 'closing down sales'.

Pressures generated from online retailing and changes in consumer habits, plus the global shocks generated from the war in Ukraine and the pandemic with its numerous lockdowns have all contributed to the deterioration of this sector.

Specifically looking at Derby, the retail scene here is predominantly centred around the indoor shopping mall, the Derbion. It is easy to take aim at Derbion and blame this for the downfall of the high street, but most cities and major towns have indoor shopping centres, with some having more than one and still capable of co-existing with the high street offer.

Ultimately, any retailer or leisure operator looking to open premises in Derby will consider several factors when making their decision as to choosing the right property. The financial and physical factors that come into play with any decision-making process are matters that are usually borne out through landlord and tenant negotiation. A high street with several vacant units will dictate rental levels together with any incentives that the landlord is willing to offer to a tenant to absorb some of the costs and 'sweeten the deal'.

There are however factors that are beyond the control of the landlord that the tenant will use to select the right property. These are related to locational factors; does the tenant need to be close to a particular business or perhaps further away from a competitor?  Invariably these locational choices are based on footfall (i.e. the number of people entering a shop or shopping area in a given time).

Personally, I am not a big fan of statistics as I am always left with more questions than answers. I need to have values logically justified with an explanation as to why these figures have 'peaks or troughs' and to this extent a set of numbers or graphs usually only tell part of a story.

However, the importance of statistics should not be underestimated as most retailers or operators will consult these as a matter of course prior to perhaps even drawing up a shortlist of cities to base their operation in.

Derby has several footfall counters located throughout the city, they measure the number of people passing through a particular area and collate the figures and are located at key strategy points throughout the city; East Street; Cornmarket; Iron Gate; St Peters Street.

The graph to the right shows the combined footfall data taken from each of the four camera locations from January 2019 up until October 2022.

Looking at these camera locations in further detail, based on a 'snapshot' from week commencing 10th October 2022 this is as demonstrated in the chart to the right [Source: PFBB Derby Retail Sales Monitor]

But what do they really tell us?

Evidently the first chart shows that footfall throughout the city has failed to reach the levels established in 2019.  This could be attributed to several factors such as changes in consumer habits, less disposable income, the pandemic or the reduction of retail offering on the high street. The likelihood is however, it's a combination of all the above.

The second chart suggests that the highest volumes of footfall are logically centred around the East Street, which just so happens to be where the bus station terminal is located.

Whilst the location of the bus station hasn't changed since its original inception in the 1930's, what has changed is that the city centre has become pedestrianised and the former high street locations are now a vehicle free place.

It is acknowledged that in removing the vehicles from the city centre high streets helps to reduce congestion, air pollution and accidents but at the same time has this been detrimental to the footfall? It's a little nostalgic when viewing photos of yesteryear which show St Peter's Street pre the 1992 pedestrianisation with buses and cars on the high street and pedestrians filling the pavements but I believe that there is some merit in looking 'back' to see if there is anything that we could call upon to help the high street.

Firstly, the council has invested heavily in making the city centre a vehicle free zone and pushed green schemes such as the e-bikes and more recently the e-scooters with the paving relayed on St Peter Street to accommodate both pedestrians and cyclists.

The benefit that this has on footfall is zero or marginal at best as the cycle/scooter lanes are designed to take people away from the high street and not draw them to its shopping experience. How many shoppers cycle into the city? I think the answer to this would be a fairly nominal number.

Obviously, the city needs to be promoting its 'green credentials' and that allowing vehicles back on the high street would be viewed as a step backwards but technology has vastly improved meaning that vehicles are more efficient and emit less. If we are led to believe that by 2030 the sale of diesel or petrol vehicles will be prohibited, then this will ultimately contribute to improving air quality.

Furthermore, in removing vehicles from the high street did it become less convenient to shop there? Having a main bus terminal that is located away from the high street and removing the old bus stops on St Peter's Street, The Cornmarket and Iron Gate may have forced shoppers to find alternative stores that are closer to the transport hub. Likewise, those shoppers who are looking to 'nip' into the city centre are unable to do so without finding somewhere to park which is in the close vicinity.

Derby does have Derbion as the main shopping area but it has previously had a solid high street offering outside of this. Historically, St Peter's Street, The Cornmarket and Sadler Gate were star attractions, but these areas are now part of a fragmented city centre which lacks cohesion and is disconnected.  In my opinion shoppers need to be delivered to these destinations, they need to be made aware of what they have to offer and these destinations need to be made more accessible.

I would not suggest opening the barriers tomorrow and allowing all manner of vehicles to use these pedestrianised zones but perhaps in the first instance provide the buses with exclusivity. In partnership with the bus operators I would suggest that more bus stops are provided in key routes or hot spot areas with perhaps a one-way system in place to control the flow of traffic.  The impact of implementing this can be measured by the same footfall counters currently in place but perhaps a better indicator would be to ask the retailers in these locations as to the benefits, as ultimately footfall counters only measure the number of people passing a given point and not the amount of custom through the door or more importantly 'cash in the till'.

Lastly, if this is successful then why not open the high street up to vehicles but perhaps limit these to low emission or electric cars. In doing this there will be a requirement to provide more parking, more drop off points and more charge points therefore, it could offer the potential to generate revenue which in turn could be reinvested into making the street scene more appealing for shoppers and businesses looking to come to Derby. 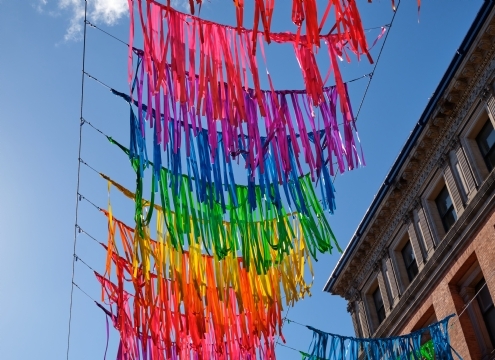 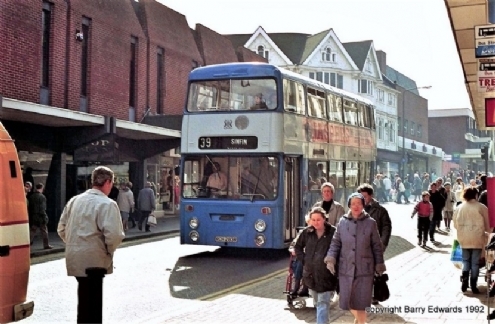