Aqua Narrow Boats has been given permission by South Derbyshire District Council for a new production site at Foston.

A Derbyshire firm which makes and hires out canal narrow boats has been given the go-ahead to build a factory in the county that will create new jobs.

Aqua Narrow Boats, based at Mercia Marina, near Willington, has been given permission by South Derbyshire District Council to construct the factory at Foston. The purpose-built facility will be sited at the Tomlinson Business Park, in Woodyard Lane, and will create an extra six jobs at the firm.

Aqua Narrow Boats specialises in the building and fitting out of narrow boats, using hulls from other manufacturers. It has a team of craftspeople, including joiners, engineers and electricians, who fit out the boats to customer specifications.

The new factory building has been designed in such a way to accommodate the hulls - and will have enough space to allow the firm to work on three boats at a time. There will also be a new showroom/display area on the first floor of the building, to show off some of the fixtures, fittings and other products to customers by appointment.

According to planning documents submitted as part of the application, the firm said:

"This facility is in relation to Aqua Furnishings, a new and expanding part of the business that manufactures and retails furniture and soft furnishings for the boating market.

The showroom and trade area is for customers to see the range of products before they purchase. It would be a book by appointment service rather than a retail area.

The company retails through an online site and at boat shows such as London Boat Show with focus on the trade and wholesale market.

It is anticipated that at least 60% of goods sold in this manner will be manufactured on-site."

Aqua Narrow Boats was founded in 2004 at Kings Bromley, in Staffordshire, when the firm's managing director, Justin Hudson-Oldroyd hand-built his first hire boat.

Four years' later the firm expanded and moved to its current base at Mercia Marina, which is on the Trent and Mersey Canal. It recruited local carpenters and engineers and quickly developed into a busy bespoke boat building and marine repairs centre. The firm then expanded its services to include interior design, coming up with products that not only look good but make the most of the space available. 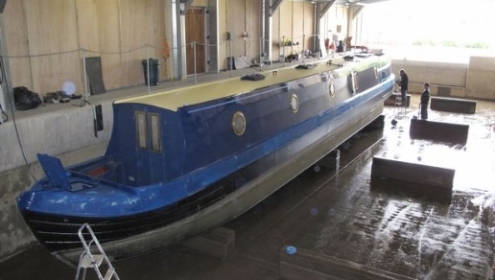